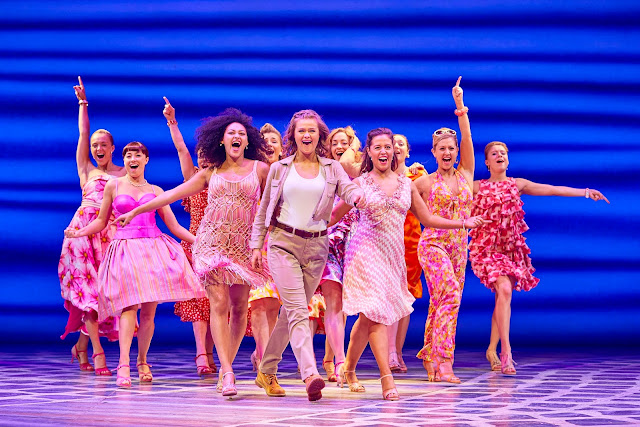 It's great when a professional show comes to MK from the West End. Mama Mia has already enjoyed great success so it’s no wonder they are booked in MK for nearly three weeks. This gives many more people the chance to see this great feel-good show.
We all know it's the story of a girl who wants to find her true father among three possible flings her mother had 21 years ago. The film of course is beautifully set on a Greek island but the stage setting did much to create a bright blue mood with the use of lighting and a quite simple stage set. But Mama Mia isn’t about the plot (!!) but more about the songs and the dancing. Ideally you have to be an Abba fan (and who isn't?) to enjoy this musical.
The characters were very much look-a-likes and act-a-likes to the original film actors and that seemed to work well with the audience.
The audience were happy to be taken back to the seventies, Abba style, with the silver costumes and platform heels along with the cast who seemed to be having a ball. The audience all agreed it was jolly good fun.
Helen Hobson played the main character Donna and was ably supported by her two comic friends Rosie and Tanya ably played by Gillian Hardie and Emma Clifford. Lucy May Barker played the young Sophie. I did however struggle with the casting of Phillip Ryan with his strong Scottish accent playing her beau Sky. But that aside, the other male actors Jon Boydon, Jamie Hogarth and Christopher Hollis all brought something different to their characters.
The show runs at MK Theatre until the 20th May.
Tickets from www.atgtickets.com/Miltonkeynes or telephone 0844 871 7652 (booking fee applies)
Posted by Phonebox Magazine at 15:38