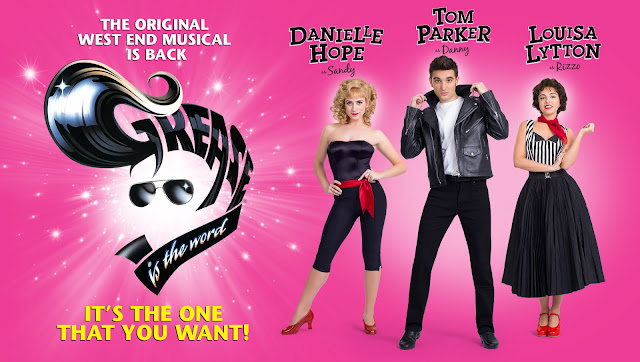 The show developed in early 1970 by Jim Jacobs and Warren Casey, was first staged as an amateur production in 1971, it opened just off Broadway on February 14th 1972, it won 7 Tony awards.
The first UK production was in 1973 at the New Theatre London.
The famous film with Olivia Newton-John and John Travolta was released in 1978.

Based loosely on Warren’s experience as a late 1950’s high school teacher and the interaction of the greasers, their girlfriends and the great rock and roll music of the era, and of course on the hot-rod cars of the day.

I have to say that I haven’t seen the film but was very aware of the hit songs and their video clips, I did however know the story.

I found the show and performances very exuberant, possibly a little too in your face, however the songs were all well performed and the dancing very good.
George Olney was particularly good as the Teen Angel, a great voice.

The band too were excellent, and looked good in their setting above the back of the stage.

Despite that fact that there were quite a lot of youngish children in the audience early teens and younger I am not sure that it could be taken as a family show with the handling of some of the sexual/romantic content, periods and pregnancy.

The acoustics of the MK Theatre were as usual very good, the stage set was flexible and conveyed the scenes being portrayed.


The costumes beautifully portray the fashions of the period.

Head over to www.atgtickets.com for tickets - Grease is running until Saturday 2nd September
Posted by Phonebox Magazine at 13:12 No comments: 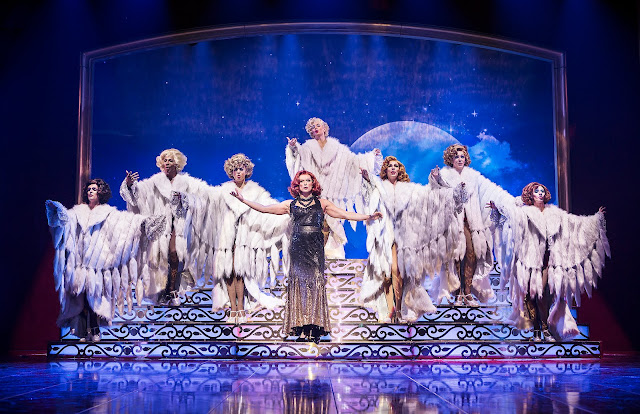 A classic, OTT musical with something for everyone - a thoroughly enjoyable show about family, friendships, love and being true to who you are.

The story is about Georges and Albin, a flamboyant gay couple running the celebrated nightclub ‘La Cage Aux Folles’ in St Tropez with Albin as the show’s star Za Za. When their son, Jean-Michele, reveals he wishes to marry the girl of his dreams, Anne – the daughter of a right-wing homophobic politician – we then follow this extraordinary family as they hide their identities for a comical meeting with Anne’s parents.

In terms of the stage set, lighting and costumes this was spot on – transporting the audience to a real-life French Cabaret. We got exactly what we’ve come to expect from extravagant drag attire – with feathers, wings, glitter, sequins, high heels and wigs galore. The orchestra were as much a part of the show as well, with Za Za’s cheeky flirting with ‘Sandra’ the conductor.

The leads are played by Adrian Zmed as Georges and John Partridge as Albin, both of whom play their parts fantastically. John channelled his inner diva and entertained us greatly with his performance as both Albin and Za Za, he had the audience involved from the start and cracked some fantastically rude one liners amongst his superb singing. Not to forget the rest of the cast, ‘Les Cagelles’ dazzled us with their dance routines and a shout out to critically acclaimed Marti Webb as Jacqueline, who impressed us as their dear friend and owner of a trendy restaurant. Lastly a stand out performance from Samson Ajewole as Jacob, Albin’s butler/maid who was as camp as can be and funny in every way.