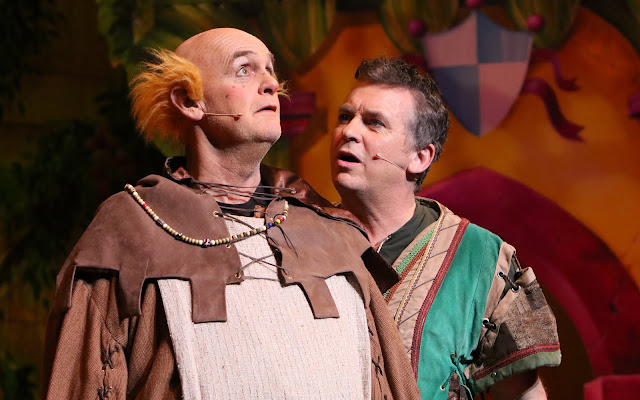 You simply can’t have Christmas time without panto! Us Brits do love the panto and the sillier the better. But we also love a good show with fantastic costumes, acting, music and dancing. Qdos Entertainment’s Robin Hood ticked all the boxes and more: A well-known Bafta-winning TV star? Check. Leads and an ensemble of comedy, TV and voice-over actors? Check. A seasoned West End star? Check. A mighty magician? Check. A group of international comedy acrobats known as The Acromaniacs? Check! A team of young talented dancers from Dancebox Studios? Check!

We all know the story of Robin Hood, with his team of merry men, robbing from the rich to give to the poor, the evil Sheriff of Nottingham getting in their way and of course the lovely Maid Marion whom Robin is keen to woo. Throw in some clowning around, impressive magic tricks, a spirit of Sherwood, a rather scary 3D trip through the haunted forest, crazy acrobatics, dazzling costumes and stage sets then you’ve got yourself a winning pantomime.

The show is fantastic fun for all the family with endless cheers, boos and screams from the children in the audience and plenty of cheeky laughs from the adults as the grown-up jokes and innuendos were well placed and consistent throughout the show. Of course, you must expect plenty of news, politics and current affairs creeping their way into the show too so prepare for insults, poking fun and outrageous laughter – we love it! Music and songs included some from The Greatest Showman and the classic annual Milton Keynes Panto rendition of Twelve Days of Christmas – watch out for those five toilet rolls kids!!

Starring cheeky and charismatic Shane Ritchie as Robin Hood, Peter Piper as Friar Tuck, Gina Murray as the Spirit of Sherwood, Pete Gallagher as the charming and dastardly Sheriff of Nottingham, Jamie Kenna as Little John, Phil Hitchcock as Merlin the Magician and the almighty comedy jumping Acromaniacs as the Merry Men.

For tickets, head to www.atgtickets.com, the panto is running until 13th January. Be quick, performances are selling out fast!
Posted by Phonebox Magazine at 13:02 No comments: 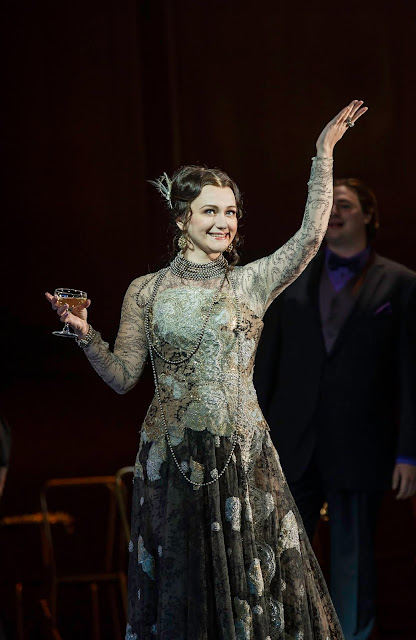 Yesterday evening, we had the pleasure of attending Glyndebourne’s La Traviata. Front row seats too and so we had a wonderful time watching the orchestra in the pit as well as the performers on stage. This opera by Guiseppe Verdi is the most frequently performed opera in the world. It has everything it needs to make it so successful and to keep fans coming back for more. With a classic, tragic love story, beautiful musical scores and of course the simple yet stunning stage and costumes, it seems it is as loved today as it was when it first appeared in London in 1856. To top it off, an excellent performance by the established Glyndebourne Tour, celebrating their golden anniversary this year.

I can’t pretend to be an opera connoisseur, however I can certainly say I had a thoroughly enjoyable evening and there was a fabulous round of applause from the audience with some whistles for Mané! The role of Violetta was performed by Mané Galoyan who is clearly an established soprano giving a faultless performance that is worthy of any tragic heroine in the opera. She was complimented perfectly by Luis Gomes, performing Alfredo and together they whisked us off to the charmingly romantic City of Light, Paris alongside the rest of the cast and chorus.

Like all operas, the story of La Traviata is quite simple but resonates with audiences across the world and indeed, has done so throughout the eras. With youth, beauty, tragedy, conflict, desperation, love, frolicking, betrayal and death what else do we need? The young, social courtesan Violetta is, eventually, convinced to accept Alfredo’s love. They move in together before his father asks Violetta to leave him so that Alfredo can fulfil his family duties back home. After she leaves, Alfredo becomes mad and jealous, then humiliates her at a soirée in front of their friends. The final Act sees Violetta terminally ill with only hours to live. Alfredo arrives begging her forgiveness and the lovers dream of resuming their life together but fate intervenes.

This opera has plenty of drama entwined with the melodies and touches on subjects that many of us can relate to including living on your own terms, falling in (or out) of love, naivety and death.

You can still catch Glyndebourne this week at Milton Keynes theatre performing Cendrillon tonight and La Traviata again on Friday, for tickets head to www.atgtickets.com
Posted by Phonebox Magazine at 14:33 No comments:

The Comedy About a Bank Robbery – Review 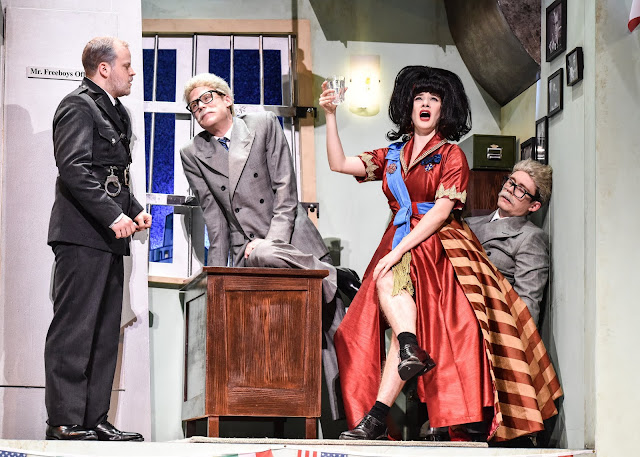 “What’s the password? Bananas?!” This show is certainly that!

This week, The Comedy About a Bank Robbery is in town bringing side-splitting laughter with it. Brought to you by Mischief Theatre, the same group that gave us The Play That Goes Wrong which was a phenomenal sell-out success.

This is one of the funniest shows we’ve seen at the theatre –The Play was fab, however I definitely did more belly-laughing with this one!! A huge hit with the audience with laughs and applause throughout. Plenty of innuendos, constant wordplay with puns, wit and banter. Us Brits do love a comedy that doesn’t take itself too seriously and we sure thrive on making a mockery of others on stage and pushing boundaries…men, women, thieves, bank managers, moustaches, old people, lovers, police, seagulls – you name it, they ridiculed them!

The story follows Mitch who has escaped from prison to rob the rare diamond under lock and key at Minneapolis City Bank. He is joined by a band of fellow robbers including Caprice Freeboys, daughter of the bank’s manager and a successful swindler of all the local men. Neil Cooper, one of the prison guards and Sam Monaghan, son of the bank’s clerk and petty thief. Of course, they encounter endless obstacles and calamities along the way.

The stage set was excellent and included a few unexpected scenes as well as clever twists and turns, sounds and lighting. The cast and ensemble were all superb and many of them are fairly fresh out of drama college! They’ve clearly trained to an excellent standard and have a real presence on stage. As I always say, the show is so much better when the cast are clearly having the time of their lives up on that stage.

A clever combination of slapstick and satire not too unlike Monty Python or Fawlty Towers – very John Cleese. This show is suitable to anybody with a sense of humour. If you don’t have one, I probably wouldn’t bother.

Tickets available on www.atgtickets.com and the show is on until Saturday 24th November 2018.
Posted by Phonebox Magazine at 13:12 No comments: