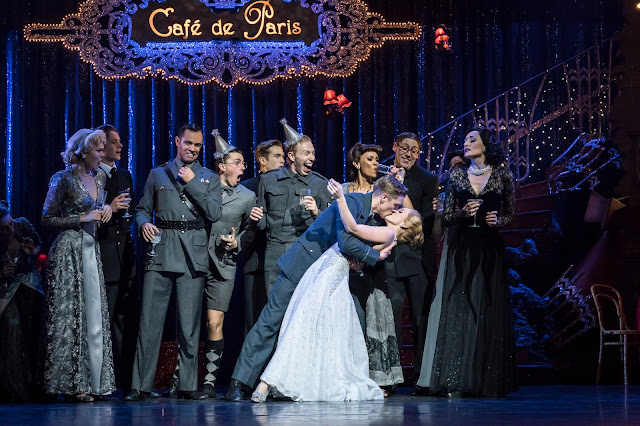 For those of you who are familiar with Matthew Bourne's work then you will not be disappointed in this retelling of the Cinderella story through dance. The show is a mixture of contemporary dance and ballet reflecting the skills of this amazing choreographer. The story is set in the London Blitz of the 1940s and uses the score from Prokofiev which provides the haunting and atmospheric music of the show. The stage set is dramatic with all the sounds, light and noise we would expect during the London Blitz. The set was expertly transformed; it was one minute a bombed ballroom and next a moon lit scene of ethereal quality.
I did find the story a little confusing at times, who was who, who was dead and who was alive. Plus there were some sub plots around to add to the mix.  But that said, the dancing was superb and the atmosphere was enchanting.
The whole cast were excellent so it's hard to single out anyone although I did think that the Angel played by Paris Fitzpatrick held the story together. Cordelia Braithwaite was beautiful and mesmerising as Cinderella and Will Bozier played the handsome pilot. Most of the cast seemed to play several parts so it was a highly energetic performance. This is a show not to be missed.
Cinderella is on at MK Theatre until the 17th February.
Tickets from www.atgtickets.com/Miltonkeynes or telephone 0844 871 7652 (booking fee applies)
Posted by Phonebox Magazine at 14:26 No comments: 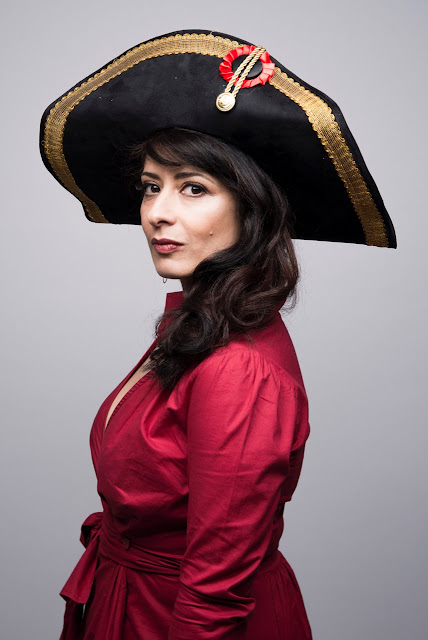 Known for television appearances including Live at the Apollo and Have I got News for You, as well as her stand-up comedy and her work as an author, Shappi Khorsandi is taking a more historical angle with her latest show, ‘Mistress and Misfit’. Going to around 50 venues across the country, including the Stables TONIGHT! She’ll be using her critically acclaimed brand of stand up to tell the story of Emma, Lady Hamilton, the actress and model best known as the mistress of Lord Admiral Nelson.

“I relate Emma’s life to modern women and, like all stand ups, I draw people into the world as I see it so it’s a very personal show”, Shappi explains.

“When you’re a stand-up, people have come to see you and share the experience with you. They can read a book about Emma, Lady Hamilton, but the way I tell her story draws people into my stand-up, which I hope is why they bought a ticket in the first place.”

She started off trying to write a novel about this often-misunderstood historical figure, but eventually settled on doing a comedy show about her instead. She also outlines a few of the similarities between them, saying that: “We were both artist’s models. She modelled for great artists, I modelled for GCSE students in Tower Hamlets. I have never worked in a brothel, but I have had moments that I would only tell you about on stage or when very drunk. I will be sharing some of those stories in ‘Mistress and Misfit”.

She will also be exploring the ways in which Emma has been dismissed by history, in a way that historical women often are. As she explains, “Any woman who does anything seen as salacious is still demonised today. That’s a very modern theme. It’s not exclusive to Georgian times.

“Emma ended her days derelict, penniless and alcoholic in Calais. There was no monument to her. We have not been told what a massive impact Emma had on Nelson’s life. Historians have wanted to make Trafalgar about Nelson and not ‘this harlot’.”

You may also recognise Shappi from her recent appearance on “I’m a Celebrity”, which has also inspired her creatively.

“It made you really look at life from a different angle” she says of the experience. “You are too hungry to think of anything apart from what you want to do with your life. You have time to figure that out. It made me think I really, really want to write that play.”

But underpinning everything Shappi does is a love of comedy. “It’s a compulsion” she says. “It’s a sort of madness. Stand-ups are all mad. We are bright, and if we weren’t mad, we’d be doing something else.”

Forget having a boring Friday night in - Shappi Khorsandi is appearing at the Stables TONIGHT. For tickets, go to https://stables.org/.
Posted by Phonebox Magazine at 11:04 No comments: