In this new, dazzling production, the audience are taken through the ups and downs of the life of Glenn Miller. He begins with a simple trombone and the hopes of becoming a world-famous star. Then, once meeting and marrying Helen Burger, he finally reaches the stardom he has always dreamed of.

However having become accustomed to this life of fame and fortune, the music legend suddenly vanishes as he flies to Paris over the English Channel during WWII, intending to go and entertain the troops. It really was a performance of fame and hope shrouded in mystery… What really happened to Glenn Miller?

A live band performed the stunning music throughout the show and how fantastic it was! The songs include ‘It Don’t Mean a Thing If It Ain’t Got That Swing’, ‘Sing Sing Sing’, ‘Get Happy’ and ‘Moonlight Serenade’, all of which were extremely popular, with the audience often clapping and singing along.

Tommy Steele himself played an absolutely fantastic role; he was captivating and so likeable – especially when he spoke to the audience at the very end. Another actor who really stood out was Sarah Soetaert who played Helen Burger. She has such an incredible voice, which harmonises so well with Tommy Steele’s tone.

The Glenn Miller Story is on at Milton Keynes Theatre until 31st October – visit atgtickets.com to book.

Posted by Phonebox Magazine at 16:47 No comments:

Review of Romeo and Juliet at MK Theatre

Once again, the English National Ballet have achieved great things with their performance of Romeo and Juliet

Romeo and Juliet is a classic tragedy by William Shakespeare, but when told through ballet, it becomes even more of a dramatic, passionate piece.

From the world famous balcony scene with two star-crossed lovers, to their tragic final moments, this energetic performance literally had it all. Sergei Prokofiev’s live score, performed by English National Ballet Philharmonic, was absolutely breath-taking; it accompanied the ballet with such cleverness and panache.

Romeo and Juliet themselves - played by Isaac Hernandez and Erina Takahashi - were cast fantastically well; they were believable and their dancing told such a powerful story.  Having said this, the one dancer who really stood out was in fact Mercutio, played by 19-year-old Cesar Corrales. His comical dancing solos and immature nature worked in brilliant timing with the orchestra’s score – the humour entwined throughout his dancing isn’t something I’ve seen before in ballet.

The most significant scene by far was the final Act, as Romeo lay dead and Juliet awoke to find him. However another immensely powerful Act was that led by Tybalt and Mercutio: the fight scene. Even though the set design was very simple, it was particularly effective in this scene; the clashing of swords really had the audience in utter silence, completely in awe of the actors’ skills teamed with Rudolf Nureyev’s powerful choreography.

The show’s last night at Milton Keynes is on 24th October – visit atgtickets.com to book.

Posted by Phonebox Magazine at 15:23 No comments:

Parliament’s administrators are considering putting an end to using vellum to record Acts of Parliament.
Newport Pagnell is home to William Cowley, the only remaining company in the UK who produce parchment and vellum which is made from animal skin to document historical records relating to centuries of Parliamentary activity. 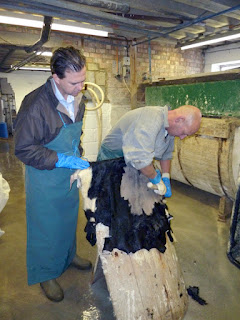 Parliament’s continued use of parchment and vellum is the envy of the world and it’s thanks to vellum and its durability that we can read journals dating back to King Charles II, King Richard I and several million historical records for Parliament, including the Magna Carta, the most celebrated document in history, which has survived for 800 years.

Established in 1870 and now one of three surviving producers in the world, Paul Wright, of William Cowley said,

"There is bitter irony that the very year we celebrate 800 years of Magna Carta, we may also witness the end of recording Acts on vellum. Vellum has excellent 'green' credentials, needs no specialist aftercare, and has provided us with more understanding of earlier civilisations than any other historical artefact."

Mark Lancaster MP, is seriously concerned that proposals for Parliament to end the use of vellum will in fact be a longer term cost and has written to the Chair of the Administration Committee, Sir Paul Beresford to share his concerns.

“I’m determined to try and do my bit to convince Parliament to continue to use vellum to record Acts of Parliament for future generations. What records will exist in 2815?  What evidence will be left for future generations?   Historians have known that but for the use of vellum, we would not have the information or the understanding of earlier civilisations that we have today.  I for one would not want to rely solely on electronic data to preserve and protect our heritage. I understand the need to reduce cost but I believe this particular measure is short sighted and Parliamentary authorities should reconsider.”
Posted by Phonebox at 10:24 No comments:

The Queen is Dead!

Following sold-out performances at the Almeida Theatre, King Charles III has hit Milton Keynes Theatre, bringing with it the shock that the Queen is dead. Directed by Rupert Goold and penned by award-winning Dr Foster writer, Mike Bartlett, the regal play explores not only Britain’s most famous family, but how the prince perceives ruling the roost for the very first time.

The humourous side of the play was continually enjoyed by the audience, however there are clearly more serious undertones to the dramatic performance too. With William and Kate – who is particularly well-cast and looks uncannily like the Duchess herself – having to make tough decisions, the play really did give an insight into just how significant the royal family are.

One character who particularly stood out was Prince Harry, played by Richard Glaves. His charm, immaturity and likeability really shone through and he constantly had the audience enthralled in his outbursts! King Charles III himself – played by Robert Powell – faces some very important decisions and there was a chill to be felt over the audience at two particularly haunting points in the performance – but we won’t give too much away.

With the same setting used throughout, it worked seamlessly and the lighting worked fantastically well with the backdrop.  With crowns and royalty galore, it really was an exciting performance. Having already won an Olivier Award and a Critics Circle Award for Best New Play 2015, this really is a must-see!

King Charles III is at MK Theatre until 17th October – visit atgtickets.com to book.
Posted by Phonebox Magazine at 17:03 No comments: