Review: Crazy For You at Milton Keynes Theatre

Crazy For You at Milton Keynes Theatre 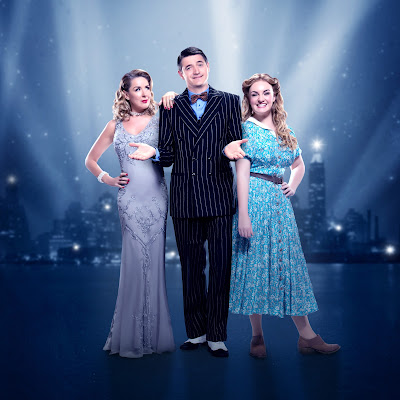 Crazy for You tells the story of Bobby who, despite working for the family’s bank, would rather be a Broadway star. After being sent to close a failing theatre down in Deadrock, Nevada, he falls in love with the owners daughter, Polly, and tries to save the theatre by putting on the greatest show of all time.

Charlotte Wakefield who played Polly was brilliant. She portrayed the character well and I believe she was the best singer on stage. However, all the singing was excellent and the songs were very catchy and had good narrative. I’m not quite sure where the two hotel reviewers fitted in, and don’t think they added anything to the story.

The set was ok with not much changing from scene to scene. Visually, this got a bit boring towards the end but the amount of action and dancing on the stage made up for this.

I particularly enjoyed the fact that all the actors also were the orchestra and all the music was played live on stage and became part of the performance but I expected more from the big finale that I think could have lasted longer.

Crazy for You is on at Milton Keynes Theatre until Saturday 24th March. For more information and tickets, go to www.atgtickets.com

Posted by Phonebox Magazine at 15:35 No comments:

Email ThisBlogThis!Share to TwitterShare to FacebookShare to Pinterest
Labels: ATG Tickets, crazy for you, MK Theatre

Crazy For You - An interview with Charlotte Wakefield 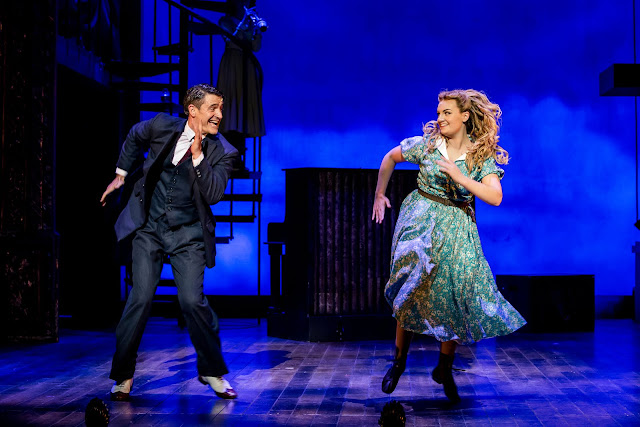 This week, Phonebox spoke to Charlotte Wakefield, who is currently starring as Polly Baker in the UK Tour of Crazy for You.

As Charlotte says, George and Ira Gershwin’s iconic music is ‘a classic story of love and mistaken identity… it has classic numbers such as I Got Rhythm, it’s got slapstick comedy – it has everything you could want in a show!’

Charlotte has appeared in a dazzling array of musicals ranging from Spring Awakening to Chitty Chitty Bang Bang and in Crazy for You, she’s once again stepping into new territory. ‘It’s in a different vein,’ she explains to us, ‘I’m using my tap skills, which I’ve never used professionally before, it’s just an entirely different genre.’ Something else that makes Crazy for You stand out is that it’s what Charlotte describes as ‘an actor-musician show’, meaning that ‘all of the instruments are played by the ensemble, so there’s no orchestra’.

When asked, Charlotte lists her favourite musicals, which include ‘Mary Poppins, Me and My Girl, Fiddler on the Roof and the Sound of Music, which I’ve been in at the Regents Park Open Air Theatre’, as well as numerous others. ‘I’m a huge musical theatre fan’, she says, ‘I try to listen to at least one new score a week!’.

She goes on to explain why she loves performing in musicals, as ‘you get to do lots and lots of things all at once, it’s a different emotional outlet. To see people singing along and tapping their legs is also really rewarding.

She then went on to say, ‘Theatre is personal to so many people in so many different ways – and we’re able to bring theatre to people who need it. When I meet people after the show and they tell me that they’re going through a rough time and how the 2 ½ hours have helped them, that’s great too.’

And does she have any advice for those who want to go into Musical Theatre? ‘Patience is a virtue’, she responds, ‘you have to keep believing, continue to work hard and always keep learning. You need to be aware that you will have to work hard, but that all your hard work will pay off eventually.’

When we ask which record she would take with her if she were stranded on a desert island, she thinks long and hard before responding ‘It’s cheesy to say, but probably I Got Rhythm, because it’s quite uplifting’, before she jokingly adds,  ‘although you’d probably get a bit bored of it after a while!’

Crazy for You is on at Milton Keynes Theatre from Tuesday the 20th to Saturday the 24th of March. For more information, go to www.atgtickets.com
Posted by Phonebox Magazine at 10:49 No comments: 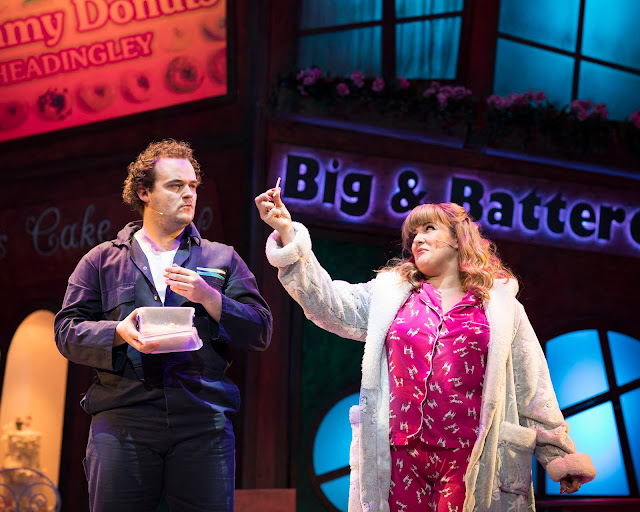 This week, Key Mellor’s Fat Friends The Musical is at MK Theatre until Saturday 10th March. The story follows Kelly (played by Jodie Prenger) along with her friends and family (Kelly’s mum is played by 2013’s X-Factor winner Sam Bailey) as her wedding day draws closer and she cannot fit into her dream dress. Kelly buys the dress anyway and then latching onto the publicity, local slimming club owner, Julia Fleshman offers to pay for the dress if Kelly follows her plan and fits into the dress – in just six weeks! Mischief ensues as we follow the group leading up to the big day.

I haven’t seen the television series, but I can imagine it is relatable and rather funny to watch the oddball group of friends from Headingly as they drool over battered cod and chips whilst removing as many layers of clothing as possible before standing on the scales for the weekly weigh-in!

This musical was quite fun and an entertaining evening, however unfortunately for me, I just couldn’t click with plot or the characters! I felt it was a little tedious. The stage set was well done - simple, colourful street design which transformed into the inside of each shop. As well as excellent sound and lighting which is always the case at MK Theatre. The acting, singing and dancing was good especially Jodie Prenger’s solos but I felt that the songs didn’t give her chance to show us what she’s really made of. Also a fab performance from Rachel Wooding as Kelly’s rude, insufferable sister. The music was easy listening with some laugh out loud lyrics and dance moves in parts but not catchy and I can’t say I could remember any of the tunes or lyrics once we left the theatre. The characters themselves were funny, relatable and normal people but I wonder if this should have stopped on the television or maybe a feature length comedy film – just not sure if it works as a musical.

That being said, we had a fun evening and there was some seriously good talent up on the stage and a fantastic job from the live orchestra.

For tickets, and to decide for yourselves on this one, visit www.atgtickets.com
Posted by Phonebox Magazine at 16:18 No comments: