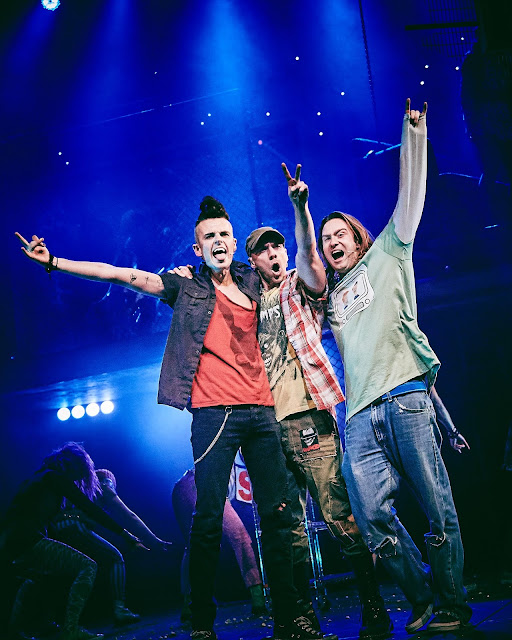 American Idiot is on its 10th Anniversary Tour and is in town at Milton Keynes Theatre this week until Saturday. We went along to last night’s performance for the opening night of this Tony and Grammy award winning show.

The story follows three boyhood friends on their search for meaning in a post 9/11 world. They live in ‘suburbia’, bored and frustrated with life and so they head out on their own to try and make something of themselves with quite tragic consequences. The show is based around Greenday’s Grammy Award winning album American Idiot and is in the style of a punk-rock opera with minimal dialogue. Songs include American Idiot, Boulevard of Broken Dreams and Wake Me Up When September Ends.

The show is quite niche – perhaps not something your average musical fan would enjoy so I went in with an open mind, as a huge fan of Greenday (I saw the band perform this album live at The MK Bowl back in 2005). This isn’t your typical All-American-Dream, glitz and glam musical, in fact it is the complete opposite with a fair amount of hopelessness, dark and dreary settings, anarchy, sex, drugs and rock and roll. I couldn’t help but feel the show did lack a bit of ‘soul’. To see punk rock bands live (or any live music for that matter), is unlike any other experience, the sheer energy and emotional atmosphere on stage and in the crowd cannot be matched in a theatre production and acting rebellious certainly isn’t the same as actually being rebellious. However, that is where we must remember this is not meant to be a Greenday gig. This musical is its own entity, theatre productions have a whole host of their own excitements and this show has plenty of them, fans of Greenday can still thoroughly enjoy the music, lyrics and epic guitar riffs. Likewise, musical fans can enjoy something completely different and experience a taste of Greenday’s catchy songs. The cast were brilliant and all had a great stage presence for their own characters, there’s no lack of talent in this cast, great singers and performers and they all looked awesome in their costumes.

The stage set was great and it really transported you to the grubby homes and lifestyles of the characters. Having the band situated on the upper level of the set as a permanent feature throughout the show was really effective – especially as a punk-rock opera where musicians are just as important to the show as the cast. The show and music are as relevant today as they were 15 years ago when the album was first released.

The show contains lots of swearing, drug use and sexual references, so certainly not one for kids! But I would highly recommend seeing this one. Tickets available on www.atgtickets.com and the show runs until Saturday 27th April.
Posted by Phonebox Magazine at 12:28 No comments: 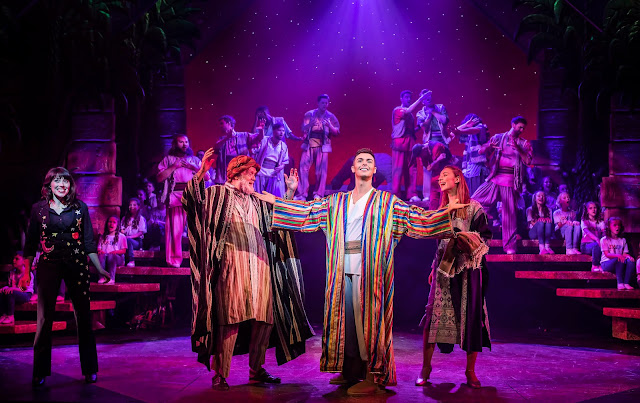 Having seen Joseph and the Amazing Technicolour Dreamcoat at least three times already I feel as though I know the script! Obviously, I think it is a lovely feel good show that has all the perfect elements of an Andrew Lloyd Weber musical. I like especially the fact that it is nothing but singing and dancing; there is no `talking` as such. The biblical story of Joseph, loosely interpreted of course, is narrated by the wonderful Trina Hill who holds the whole show together. Unlike some musicals there is actually a story to support the songs albeit a simple one! This is an ideal show to take all the family to.
Having seen previous incumbents playing Joseph, Jaymi Hensley is as good as it gets. He had a very strong voice almost operatic in its quality. The eleven brothers of Joseph were brilliant, bringing so much energy to their roles. They were both entertaining and humorous. There were also so many local children in the Joseph choir that I could hear several parents chatting about them during the interval. The children were an absolute delight and really enhanced the whole show.
The stage set up and lighting were of the usual high standard we expect from a musical at MK Theatre. We mustn't forget the Joseph Orchestra who were excellent. It`s good that live music is still being supported in our theatres. This is a show not to be missed. It`s going to be a sellout. Joseph is on untill Saturday 13th April.

Tickets from www.atgtickets.com/Miltonkeynes or telephone 0844 871 7652 (booking fee applies)
Posted by Phonebox Magazine at 15:29 No comments: 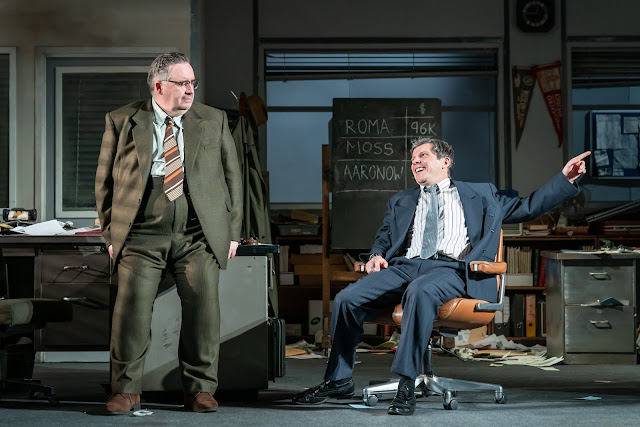 Set in Chicago, America circa 1970s in a dog eat dog world of selling real estate. The story focuses on the salesmen who are driven to desperate measures to survive and be top of the sales leader board. It certainly  took a while to get in tune with the American accents.
The story has parallels with 'Death of a Salesman' but with a more earthly language that I found quite wearing. Does anyone really swear that much! It was also hard to stomach the casual racism of those days and the occasional disturbing line that was offensive.
Although it had comedy actors I wouldn't say this was a comedy although there were a few funny lines. Mark Benton played the main character Shelley and was at his very best. One couldn't fault the competence of the actors.
As a story that needs to be told, I am not sure. The story plays homage to Death of a Salesman but it's a hard call to surpass that classic play.

Glengarry Glen Ross is on at MK Theatre until Saturday 6th April
Tickets from www.atgtickets.com/Miltonkeynes or telephone 0844 871 7652 (booking fee applies)
Posted by Phonebox Magazine at 12:53 No comments: