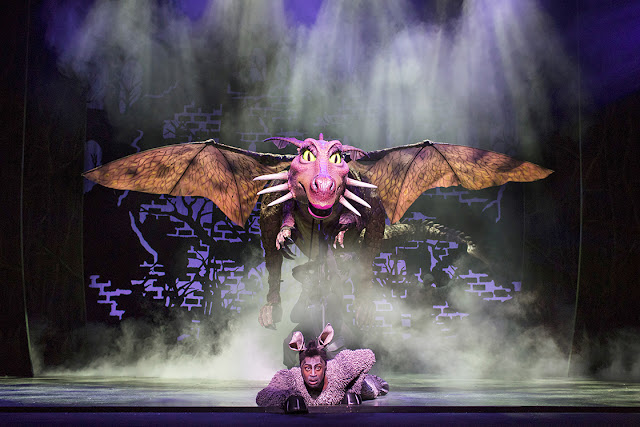 Shrek is an ideal musical to take your children along to in the school holidays. It's a professional production all singing and a bit of dancing. The story draws on many of the characters from our well known fairy tales that children would enjoy recognising as many as they can.
Shrek has quite a pantomime feel which  is well known genre that has stood the test of time. There are many themes such as our definition of ugliness and I particularly liked the song about who had the worse childhood. There were plenty of laughs and fortunately some adult jokes to keep the older members of the audience amused.
The stage effects and lighting were excellent. The dragon will certainly give the children a fright (till they get to know her!)
The key characters of Shrek (Steffan Harri), Fiona (Laura Main), Donkey (Marcus Ayton) and Lord Farquaad (Samuel Holmes)were played brilliantly. My favourite character has to be Donkey and certainly had some of the best lines. Lord Farquaad knew how to play up to the audience but thankfully didn't come across as a totally evil villain but more a likeable rogue with some height issues.
Shrek is on at MK Theatre until the 5th August. With reasonably priced tickets it's an opportunity to experience some cooler air in the auditorium and entertain the kids in the summer holidays.

Tickets from www.atgtickets.com/Miltonkeynes or telephone 0844 871 7652 (booking fee applies)
Posted by Phonebox Magazine at 08:09 No comments: 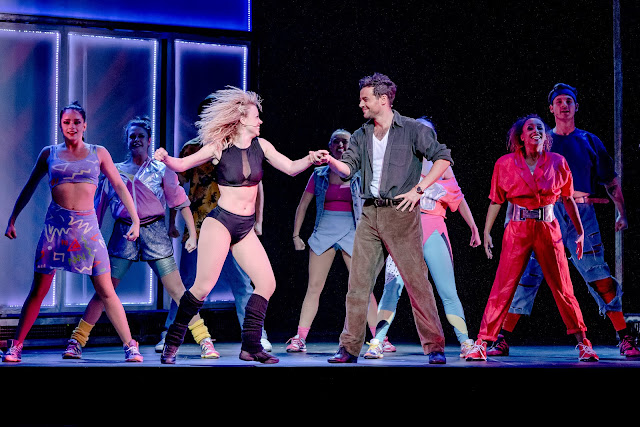 Who doesn’t love an 80’s classic filled with some foot-tapping and all-out-maniac-dancing? Flashdance The Musical is at Milton Keynes Theatre this week until 21st July and it won’t disappoint you.

Based on the 1983 smash hit movie, Flashdance starring Jennifer Beals as Alex. The story follows Alex Owens (Strictly’s Joanne Clifton), welder-by-day, exotic-dancer-by-night on her mission to get into a real dance company. Along the way, we meet her boss/boyfriend Nick Hurley (Ben Adams of boyband A1) and her colleagues and friends as they cope with their own struggles and successes.

It’s a fantastic feel-good story with a classic moral of just going for it – follow your dreams. Joanne Clifton is utterly incredible with some of the most energetic dance routines I’ve seen. The whole cast and ensemble were brilliant and it was a thoroughly enjoyable show to watch. I did feel that the show had a few slow-burning filler scenes that it could have done without and I wasn’t a fan of the American accents – can we just have English accents?! That being said, the show more than makes up for it with lots of great scenes with songs such as Maniac, What A Feeling, Gloria and I Love Rock And Roll and of course the iconic scene with the water. I wish that scene was a bit longer with more build up – seemed to be over quite quickly but it was still fantastic.

The stage set was really interesting and forever moving around which kept the audience on its toes. There were also some awesome 80’s outfits!

The show ended with a full audience standing ovation, lots of clapping and a boogie whilst they did a few super-energetic and encores!

For tickets, visit www.atgtickets.com
Posted by Phonebox Magazine at 17:00 No comments: