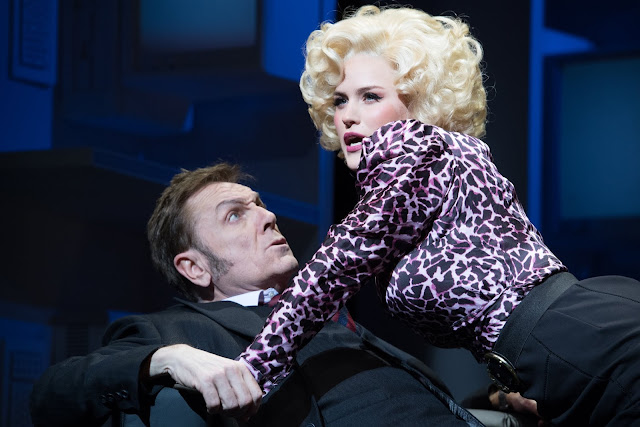 9 to 5 is based on the film of the same name from 1978 and is about how three secretaries get their own back on their male chauvinistic boss. The story has been toned down a bit as they no longer want to kill him but more to punish and rehabilitate him.
The musical has Dolly Parton written all over it which is not surprising really as she has not just given her name to the show but had a massive input into it from the music to the story and the characters.
In some ways the story is dated and very much a story of its time being set in the 1980s. Its quirky, corny and daft at times but it seems to work as one forgets political correctness and the equality of men and women in the workplace that we take for granted (mostly) today.
Apart from the song 9 to 5 the tunes and lyrics are unmemorable. No great hits here. Thankfully we had at least 2 renditions of 9 to 5 to get the audience up dancing and singing in their seats.
The star of the show was Brian Conley who played Mr Hart the male chauvinistic boss from hell. It was amazing how he held the audience in the palm of his hand with perfect comedy timing. Let’s face it Brian can’t really sing or dance to any high level, but it didn’t really matter. Even with those limitations I can’t imagine anyone else could have done the part of Mr Hart so well.  What casting! The double act scene with Roz (Lucinda Lawrence) as she fantasised about her unrequited love for her boss was probably the best scene of all.
It took a while to get used to the Dolly Parton character but Georgina Castle who played the role of Doralee soon began to bring the audience with her on this journey. Well done also to Laura Tyrer who ably stepped in to play Violet in this performance.  Also, a mention for Amber Davies who ably played Judy. What a great line up of actors.
The stage setting, the music and the lights were West End theatre at its best and all brought to MK Theatre.
This will be a sell out show so do try and see it. It’s on until Saturday 28th September.
Tickets from www.atgtickets.com/Miltonkeynes or telephone 0844 871 7652 (booking fee applies)
Posted by Phonebox Magazine at 15:10 No comments: 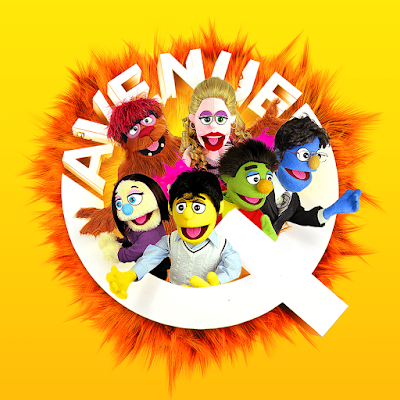 Back for a second run at Milton Keynes Theatre this puppet show could initially be mistaken for the muppets. But this is certainly not the Sesame Street that you’d want your children to watch any time soon.

The story follows Princeton who is a fresh-faced English graduate growing up and trying to find his purpose in life – a life of humans, puppets and some rather offensive songs which you can’t help but start singing along with. Who knew there would be a five minute song about what the internet is actually used for?

Intermixing puppet characters and human characters together on stage as if they co-exist in the real world worked really well. Initially I thought I would pay more attention to the puppeteers instead of the puppets but as the show went on the puppets stole the show with their great facial expressions that portrayed their feelings and intricate movements progressing the story (although some of these movements are a bit more risqué than others).

The set remains pretty much the same throughout – the only changes coming from different ‘doors’ opening to indicate a different setting and changes in lighting to portray a change of mood or pace. I feel this had mixed success as when some of the doors opened, they were quite small and it was quite hard to see what was behind each door.

The small cast were fantastic – many of them operating more than one puppet and seamlessly switched between each character making it appear there were more cast members than there actually were. Stand out character for me had to be Trekkie Monster with his crude songs and matching actions.

Tickets available from https://www.atgtickets.com/shows/avenue-q/milton-keynes-theatre
Posted by Phonebox Magazine at 16:11 No comments:

An Interview with Richard Jones 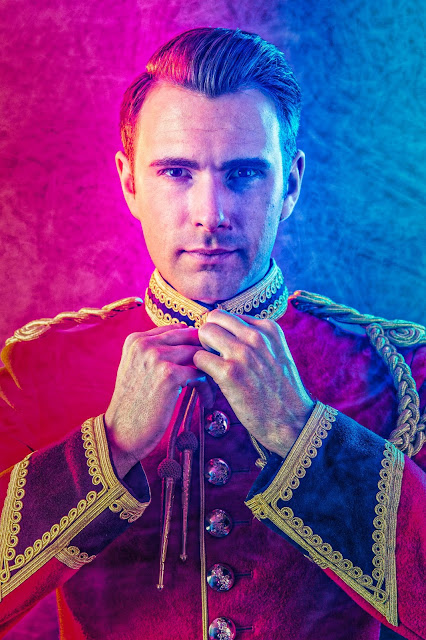 This month Phonebox spoke with 2016 Britain’s Got Talent winner Richard Jones about his new show, his future ambitions and the proudest moment of his career so far.

“I think there’s something that all forms of magic have in common; the ability to make people smile”, Richard says. “It doesn’t matter what kind of day you’ve had or what’s on your mind, if you’re absorbed in a magic trick, it’ll always distract you from whatever you were thinking about”.

Having joined the Army in 2010 and spent three years in the parachute regiment, Richard got his big break in entertainment in 2016, when he became the first magician to ever win Britain’s Got Talent. Since then, he’s gone from strength to strength, becoming a highly sought out corporate entertainer, selling out tours across the UK and performing all around the world. He’s even a Gold Star member of the magic circle! He’s also had his own one off show on ITV, Operation Magic, which aired in 2017. But he’s never forgotten his roots and performed for troops in Afghanistan in 2018.

He’ll be taking brand new tricks and some old classics across the country until the 13thSeptember and going further into the future, he also has ambitions to take his show abroad someday. What has been the proudest moment of his career so far? Richard tells us affectionately, “I think the final of Britain’s Got Talent when I got to join my mentor, the veteran Fergus Anckorn, on stage is the time I’ve felt most pride. Fergus was the longest serving member of the Magic Circle and also an amazing soldier. I looked up to him so much. He passed away a few years ago and I miss him terribly but I’ll never forget that moment”. In Richard’s top two performances are the Royal Variety Show and performing for the troops in Afghanistan, as well as performing in his hometown of Braintree, in a show that all his family and friends were able to attend.

Richard tells us his favourite trick is one that Fergus taught him and is the only one where he’s willing to break the code of the magic circle to reveal how it’s done. You’ll have to watch the show to find out what that is!

Finally, we asked him about his desert island disc and he has a surprising response, “There’s one song in particular that I always play when I’m feeling a bit nervous and about to go on stage. It’ll make you laugh but it’s ‘Footloose’ by Kenny Loggins. It’s so upbeat that it always cheers me up and I feel totally psyched up to perform at the end of it!” We have to admit that sure is a good choice for a feel good song!

Richard brings his nationwide tour to The Core at Corby on Friday 13th September. Tickets are available via: www.richardjonesmagic.co.uk/tour-dates
Posted by Phonebox Magazine at 12:31 No comments: