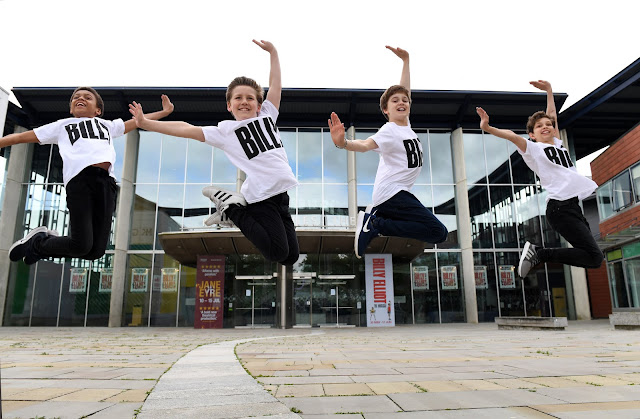 We caught up with the four boys cast as Billy Elliot; Adam, Emile, Haydn and Lewis during their jam-packed day to talk about their experiences so far, rehearsals, the show, school and even passing on some zealous advice to others their age keen to get into musical dance and acting. Here’s what they had to say:

What do they love most about musical theatre?
The atmosphere from the audience! It’s not something normal kids do, starring in a musical and that feeling of getting on stage after doing all the rehearsals and seeing everything and everybody come together on stage at the same time, is great!

Why musical theatre?
Getting to go on stage every night and see the audience’ reaction – on TV/film you don’t have anything to feed back on and we love seeing the audience. On film, if you’re having a bad day you can do it over and over again to get it right – in theatre you can’t do that, if it goes wrong then it goes wrong and that’s the fun of it! Theatre is never perfect! (We love their drive and confidence)

If not musical theatre, what would they be doing?
They’re musical, dancing actors through and through – a bit of athletics and acting on TV thrown in but they seem completely at home on the stage.

How do they find school with working at the same time?
Sometimes it’s difficult but when they’re working/touring they have a small class of about 8 students and a tutor. They have 3 hours of school a day followed by rehearsals then a show in the evening, managing to get all of their school work done in those 3 hours and can even take time off if they’re caught up (or vice versa if they’ve missed some school hours!) They can often each be studying a different subject at the same time which certainly keeps their tutor busy but they get much more focus and attention than they would in a class of 30+ and they feel they learn more.

Their advice to all kids their age no matter what they want to do?
Try hard, don’t give up. If you give up then you’ve lost your chance (if we’d given up during auditions we wouldn’t be here now). Just do what you love and if you love it, carry on with it. If anyone tries to bring you down, don’t listen to them and carry on. Probably many of the kids here on this show have had somebody at the school try to bring them down, but look where we are now? Those people are likely at home playing on their Xbox.

It’s wonderful to see how proud they are of themselves and what they’ve achieved in their lives so far – it really goes to show how hard work, dedication and passion for something can make your dreams come true. For tickets, visit www.atgtickets.com
Posted by Phonebox Magazine at 12:14