Out and About with Mark Lancaster: "I want to express my humble and heartfelt thanks to voters"

Mark Lancaster has the "best job" as Milton Keynes MP

Best job in the world

Now that we have come through the other side of what seemed a very long election campaign, I want to express my humble and heartfelt thanks to voters for bestowing me with the role of representing the constituents of Milton Keynes North for another five years.
Having nervously paced up and down watching the ballot boxes being emptied, I was completely overwhelmed by the final announcement not only locally but nationally.
It’s a fantastic honour to be voted once again as the Member of Parliament for Milton Keynes North and I have to say, I think it’s one of the best jobs in the world. I am truly grateful that I have been able to secure your trust and given me the opportunity to continue my role in MK and prove that your faith in me is justified.
My aim is to continue to deliver a better and fairer deal for our community and ensure that everybody can feel the benefits of a growing economy.
A coalition government demonstrated that we were able to provide a strong foundation for our economy, but by no means should we be complacent. There is still much to do in order to give our communities the stability and freedoms they rightly deserve.
Whilst my priority is and always will be Milton Keynes, the Government reshuffle has also given me an exciting role within the Ministry of Defence as the new Under Secretary of State for Defence Personnel, Welfare and Veterans. Having been a serving soldier for 27 years in Afghanistan, Kosovo and Bosnia, I have some knowledge in this area and to get to work in the Ministry of Defence is a dream job for me, but I have very important issues to work with.
I love Milton Keynes, I like to think I am our city’s greatest fan and it has been an honour to have been able to represent you in Parliament for the past 10 years. A further five years representing this vibrant forwarding thinking city gives me a great sense of pride and I will continue to champion its virtues with all who cross my path. 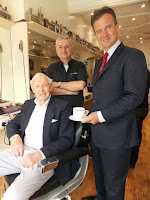 It was a joy to be able to meet lucky voter, Ro Smith from Sherington and congratulate him on winning £100 to spend at Christos Hair Centre.
Ro was randomly chosen from over 350 people who voted in my campaign to find the most popular Independent Shop of 2015 in Newport Pagnell.
On meeting up with Ro, I learnt that he had been a customer at Christos for over 30 years, in fact he used to pop into their first shop in Wolverton when he was working as a truck driver in the steel works. The family legacy continues on as Luke, Ro’s grandson, is already a regular customer at Christos and is delighted to learn that his granddad is willing to share his good fortune! Every second week in May marks the campaign for Dementia Awareness and the Alzheimers Society are always thinking of new and engaging ways in which to reach local communities.
Figures issued by the society state that 850,000 people are estimated to be living with dementia in the UK and is one of the biggest health and care challenges our country faces. Here in MK, the statistics show that over 2,000 are living with dementia and despite the diagnosis rate being high we still need to share the knowledge, information and support that’s available.
During the campaign the roadshow bus came to Kingston to reach local shoppers and having become a Dementia Friend myself. I was only too pleased to welcome the team to MK and offer my ongoing support.


Why not join their online community at alzheimers.org.uk/talkingpoint?
Posted by Phonebox Magazine at 15:00