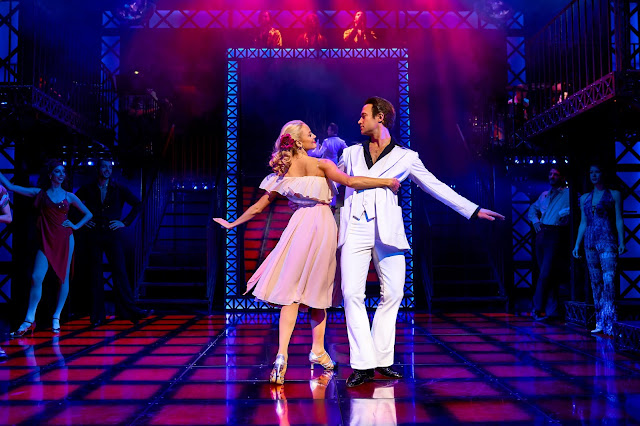 This week, seventies disco in all its hip-popping, strutting, grooving glory is in town at Milton Keynes Theatre. Based on the 1977 movie starring John Travolta. This story follows Tony Manalo, a 19 year old Italian American from Brooklyn who escapes the harsh reality of his bleak family life by dominating the dance floor at the local disco and dreams of making it big at Studio 54, New York. The show is filled with hits including Night Fever, Stayin’ Alive, More Than A Woman and Disco Inferno.

It is a fairly simple plot of boy meets girl, girl isn’t interested, boy keeps trying anyway but it is a likable story and has so much good music and dancing. It does cover a lot of serious themes, including religion, women’s rights, abuse, abortion and suicide. Disco dominated the latter half of the seventies and found its place amongst the other strong music genres of the time such as rock, heavy metal and punk. This show is all about the music, having a little dance in your seat and singing along to some banging tunes! The “Bee Gees” are on stage throughout the show, the three brothers are played by Jake Byrom, James Kenneth Haughan and Danny Knott and they were amazing, sounding just like the original music.

Tony is played by Richard Winsor – he’s one of the few actors that completely convinced me with his American accent, in this case Italian-American Brooklyn New York, and is a fabulous dancer. Richard is supported by a talented and energetic cast including Olivia Fines as Stephanie Mangano and Natasha Firth as Annette.

The staging was a good mix of bleak and harsh for the scenes outside and on the bridge and then bright and colourful for the disco scenes complete with disco dancefloor, giant mirror to reflect it back out to the audience and disco balls which really brought the audience to life. Look out for DJ Monty up on the podium dancing, he was strutting his stuff and we couldn’t stop watching him – having so much fun up there!

Saturday Night Fever is well worth a watch and I promise you’ll be singing the music and trying to do the Night Fever dance routine when you get home! Running until 19th October, for tickets, head to www.atgtickets.com
Posted by Phonebox Magazine at 11:25