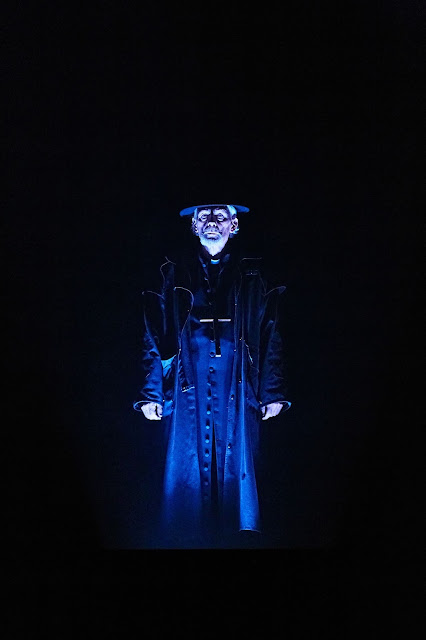 Something rather unusual and chilling has arrived at Milton Keynes Theatre this week. Possibly the scariest movie of all time, at least when it was first in cinemas in 1973, has been adapted for the stage. The Exorcist play is actually based on the book by William Peter Blatty, published in 1971, which was very important to the show’s playwright John Pielmeier who said in an interview in the show’s programme, ‘I certainly want to stay true to the story that people know, but I also want to explore elements of the book that they may not be familiar with. I want to fulfil their expectations while at the same time surprising them’. It absolutely gave the audience what they wanted, bringing new life to this famous head-spinning horror.

As a bit of a scary movie buff, I’ve seen my fair share of all things spooky, chilling and downright terrifying and must say this show did not disappoint! From start to finish, the goosebumps just kept coming. One of the best show starts that I’ve experienced (across any genre) that plunged the audience straight into the dark and thick of the story.

The potty-mouthed demon that possesses poor Regan is as spiteful and disgusting as ever and the actress portrayed both her characters brilliantly. On the one hand she is a sweet, innocent little girl that longs for love and attention from her family and on the other she is the possessed Latin-speaking, aggressive, spitting Devil himself.

The staging was simple yet remarkably clever with a few rooms of the house, the attic, the outdoors and the church scenes all playing out across one set with the use of some screens and clever lighting. They also use a very smart and effective screen as the background to Regan’s bedroom where we see spooky happenings alongside flashes and crashes of thunder throughout the theatre.

The lead characters were skilfully played by the actors which include theatre veteran Paul Nicholas as Father Merrin, Sophie Ward as Chris MacNeil, Ben Caplan as Father Damien Karras and Tristram Wymark as Uncle Burke. To top it off, the Demon is voiced by Ian McKellen – what more do we need?

The show is indeed chilling, but I can highly recommend it to anyone, not just fans of this genre. It was certainly a different audience experience to plays from other categories or musicals of course and was a night I thoroughly enjoyed. As stage designer Anna Fleischle said in the programme, ‘I am hoping that the audience will leave having been shaken to their core. I would like them to feel a sense of relief in the knowledge that they are going back to their safe and protective homes where there are no demons lurking in the dark – or are there?’

The Exorcist is on until 12th October, for tickets, go to www.atgtickets.com

Posted by Phonebox Magazine at 16:39