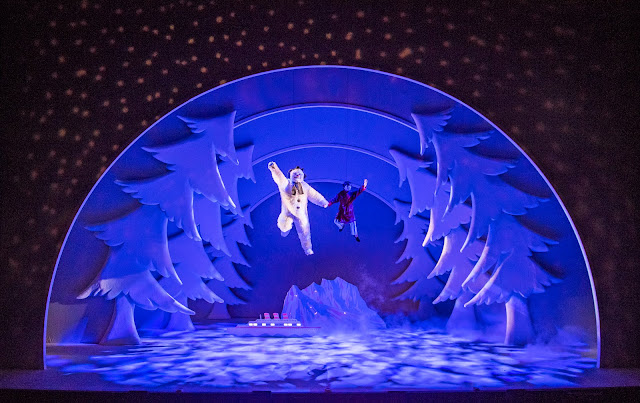 
Based on the original book by Raymond Briggs of 1978 and the animated cartoon in 1982.
This is an adaption by the Birmingham Repertory Theatre which dates back to 1993 and has over the years been much extended to make this familiar and heartwarming story into a most excellent 90 minute show.


There is no dialogue but the simplicity and slightly ethereal production of the story and the clever mime and dance to put it across, easily convey it to the audience both young and old and it is truly magical. The original music by Howard Blake enables the various scenes to be set and compliments the story being told. The additional members of the cast, which includes various additional snowmen, penguins and of course the “boys” mum and dad, all perform their parts in the story well too.
The orchestra a vital part in expressing the wonderful mood of each scene. However, it is the “goose bump” moment when Walking in the Air starts to play and the Snowman and the Boy start to fly that is the high point of the show and again is truly magical.
They portray a slow and gently grace with their movement above and around the stage. The show is full of gentle humour (and scary bits with Jack Frost an addition to the film) that will appeal to young and old alike. The stage sets, costumes and falling snow graphic are simple but excellently done. The theatres sound was great as usual.
Highly recommended. Thank you to all concerned.
For tickets, visit www.atgtickets.com
Milton Keynes Theatre
Posted by Phonebox Magazine at 10:40