Today's top news? 'Flappy Birds'. You might be wondering what on earth it is, especially if iPhones and apps are somewhat unchartered territory to you, but this phenomenon has taken phone gaming to a new level. The game consist of tapping the phone screen to get a bird to fly between tubes…and that is it. The simplicity of the game may have led to it's addictiveness, and it quickly became 'the game to play'. Among kids and adults alike, high scores were being compared, with people sharing their excitement over high scores on other social networking sites.

But yesterday, the creator of 'Flappy Birds', Doug Nguyen, removed the game from the app stores, saying that the game had ruined his life and that he'd been receiving death threats via Twitter as a result of the app. 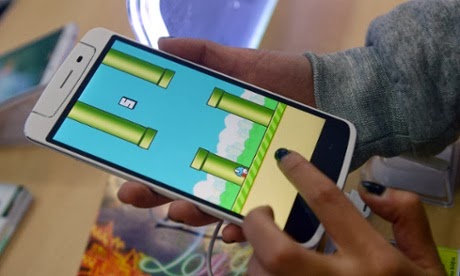 So now, despite having been downloaded more than 50 million times, phones with the app already installed seem to be going like gold-dust on eBay. Phones in auction are currently reaching as much as £250,000. It is yet unclear whether there is some sort of scam involved or fraudulant bids, but either way, this free app seems to have taken over! I'm not sure if anyone is going to be left playing the game or if everyone is going to start putting their phones on eBay. Maybe that is someone out there's ingenious plan; to get everyone putting their iPhones online thinking they're going to make a load of money. Who knows, it's all quite bizarre! If you want to play the app and you don't already have it, I'm not 100% sure it's worth your £250,000, but it does seem that some would disagree… excuse me while I get back to trying to beat my high score… 17 and counting.

Sarah
Posted by Phonebox Magazine at 09:57