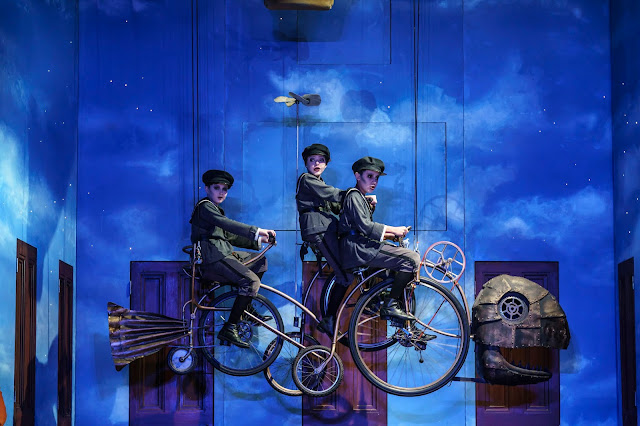 This week, the Welsh National Opera has arrived at Milton Keynes Theatre and we went along to see last night’s fantastical production of Mozart’s timeless classic, The Magic Flute. This Opera is a Singspiel (a German-language music-drama) however is sung and spoken in English which was a nice change to see an opera performed in English, though the subtitles certainly help you to understand the story! The mysterious Queen of the Night coaxes the Prince Tamino to rescue her beautiful daughter Pamina from the grip of the evil (or is he?) enchanter, Sarastro in exchange for her hand in marriage. With only a magic flute, a set of magic bells and a funny bird-catching sidekick for protection, he sets off on the long, perilous journey and they must overcome a series of challenges to complete their quest and find true love.

The Magic Flute first premiered in 1791 at Schikaneder's theatre Freihaus-Theatre auf der Wieden in Vienna and still enchants audiences around the world to this day. This irresistible production transports you to a dream world, combined with a witty story and Mozart’s sublime music and includes many colourful characters including anthropomorphic creatures and a fish bicycle! The very surreal stage set and costumes are inspired by Magritte (early twentieth century surrealist artist known for challenging observers' preconditioned perceptions of reality) so don’t be too surprised by floating heads and a sense of endless nothingness behind the doors!

The orchestra were brilliant as were all the cast on stage and in particular, The Queen of the Night’s aria, performed by Samantha Hay was incredible. The audience’ applause was wild after that one! Amongst the sophisticated seriousness and playfulness of the opera, this show also includes a touch a good-old-British panto-esque humour, so there really is something for everyone in The Magic Flute. Of course, expect pitiful damsels in distress and frustratingly melodramatic decisions to the slightest mishap, but opera wouldn’t be opera without it.

An unforgettable opera for all ages, you can still catch The Welsh National Opera in tomorrow night’s performance of Robert Devereux and Sunday afternoons performance of The Magic Flute. For tickets visit www.atgtickets.com or call 0844 871 7652
Posted by Phonebox Magazine at 14:47