We've got a debut for the blog today; a report from our MK Dons reporter, Matt Delaney. You can read his match reports most months in the Phonebox magazine, but this month, the timings of going to print mean it's earnt a place online instead! Enjoy! 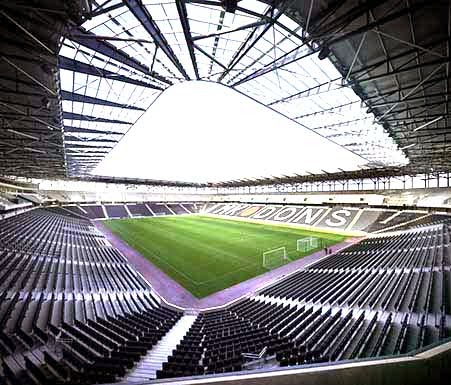 "MK Dons failed to get on the home score sheet yet again in a must win game, against local rivals Peterborough, whilst on their quest for promotion to the Championship. Peterborough strengthened their play-off hopes courtesy of two quick fire second half goals from Britt Assombolonga to sail to a 2-0 victory at Stadium:MK.

Both keepers had to be on their toes in the early stages of the game with David Martin having to tip over a stinging volley by Nick Ajose and Robert Olejnik diving well to get his hand to a well worked free kick from Ryan Hall to keep the game at deadlock in the first 20 minutes.

No team could grasp the first half by the neck and take command, possession was being given away cheaply by both teams and not many chances were being created. MK did , however, have the best chance of the half when Jordan Spence made a solo charge from the back line to the Posh penalty area then played it to Odelusi who fashioned a chance for himself out of nothing but shot just wide with Olejnik sprawling desperately to cover his goal.

As the half-time whistle sounded, the Dons fans made their feelings known to the referee with a chorus of boos and chanting aimed in his direction, after he had made some questionable decisions in the first half.

10 minutes into the second half, Peterborough wasted a golden opportunity to take the lead as a shot from Tommy Rowe was deflected up into the air, Assombolonga had an empty goal to aim at but looped his header over the bar from 6 yards, it was a glaring miss. Just minutes later, however, Assombolonga made no mistake as Michael Brostwick strolled past two Dons defenders and fired a ball towards the back post to Posh’s top scorer was there to tap the ball home and send the travelling fans into pandemonium.

Peterborough then doubled their lead on 60 minutes, just moments after the kick off, when George Baldock brought down Connor Washington in the area. Assombolonga made no mistake from the spot, sending Martin the wrong way and planting the ball firmly into the top corner to add further damage to MK Dons hearts.

The Dons’ response came with a shot that just crept wide by Izale McLeod and a desperate penalty appeal by Dele Alli who was judged to have dived in the area, the referee producing a yellow card for the 17 year old, which only added to the home crowd’s frustration.

The victory for Peterborough meant that they went 6 points clear of their Buckinghamshire rivals and into 6th place, with Karl Robinson’s men lagging behind, just outside the Play-Offs, in 7th.